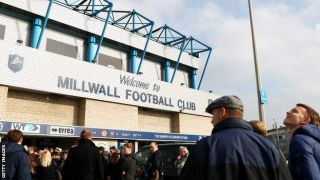 Millwall have finally released an official club statement in response to the ugly scenes that took place yesterday when their fans booed players for taking a knee before the clash with Derby County.

The South East London club don’t have the best reputation when it comes to these matters, and many will have been disturbed to see such a vocal response against an anti-racism gesture that has become commonplace before football matches this year.

The Black Lives Matter movement has really taken off since the tragic death of George Floyd at the hands of police in the US earlier this year, and it’s hard to understand why some would take such issue with taking a stand against racism.

Millwall have condemned the fans who booed the gesture, releasing a statement on their official website in which they detailed their plans to work with anti-racism charity Kick It Out to work on solutions to this ongoing problem.

See below for their statement in full:

Millwall Football Club was dismayed and saddened by events which marred Saturday’s game against Derby County at The Den.

The club has worked tirelessly in recent months to prepare for the return of supporters and what should have been a positive and exciting occasion was completely overshadowed, much to the immense disappointment and upset of those who have contributed to those efforts.

The impact of such incidents is felt not just by the players and management, but by those who work throughout the club and in its Academy and Community Trust, where so many staff and volunteers continue passionate endeavours to enhance Millwall’s reputation day after day, year after year.

The club will not allow their fine work to be in vain.

The players are continuing to use the biggest platform they have to support the drive for change, not just in football but in society generally.

There is much work to be done and at Millwall everyone is committed to doing all that is possible, both individually and collectively, to be a force for good and to ensure that the club remains at the forefront of football’s anti-discrimination efforts.

Over the coming days, club, Academy and Community Trust staff will meet with Kick It Out and representatives from other appropriate bodies in an attempt to use Saturday’s events as a catalyst for more rapid solutions which have an impact both in the short and long-term.

Further comment will be made once those meetings and discussions are concluded.