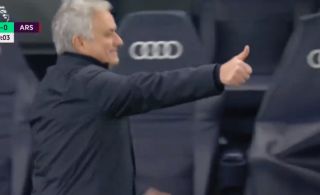 Jose Mourinho is always good value for his reactions on the touchline, but he’s also more likely to be jovial and magnanimous when his team is 2-0 up.

Dani Ceballos does well to cover the cross at the back post but it looks like he forgets where he is, so it’s a fairly textbook pass back to the keeper which he shouldn’t be picking up.

You can see from the Spaniard’s body language and demeanour that he’s in control and it’s a nice cushioned ball back to Leno, but the ref decides it’s okay and doesn’t blow for an indirect free kick.

READ MORE: Video: Son puts Spurs ahead against Arsenal with an absolute stunner from distance

You can also see that Mourinho was furious about the call, but he’s also delighted with his team so his reaction was pretty funny to watch: