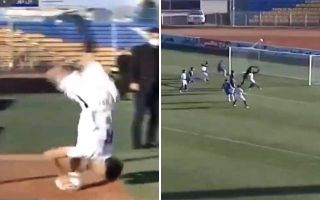 Have you ever seen a goal scored directly from a front-flip throw-in? No? Well, you have now – with the Persian Gulf Pro League being the providers.

We’ve seen players attempt front-flip throw-ins on occasion. Milad Mohammadi, an Iranian international, produced an iconic moment by trying one in the dying moments of a World Cup match with his side trailing – and failing in quite remarkable fashion.

Front-flip throw-ins must be taught in Iranian grassroots football, with Mohammadi seemingly missing that class, but one compatriot of his was present and listening intently.

Have a look at this quite remarkable goal he scored from the throw-in, with the goalkeeper getting the last touch, hence why the referee allowed the goal to stand.

Pictures courtesy of the PGPL

The goal happened during a PGPL game between Paykan and Gol Gohar, with Mehran Golrazi being the scorer. This is a moment he won’t forget, no doubt, and perhaps Iran ought to call him up to the squad if they are to qualify for the 2022 World Cup in Qatar.

Hats off to you, Mehran, you’ve singlehandedly repaired Iran’s reputation when it comes to taking throw-ins.