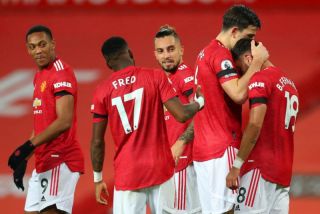 Manchester United captain Harry Maguire is confident his side will get enough from Tuesday game against RB Leipzig in order to progress into the Champions League’s knockout stages.

United head into Tuesday’s match off the back of yet another impressive comeback win after they came from 1-0 down to beat West Ham 3-1, in the Premier League last weekend.

The Reds will be looking to take all three-points away from Germany on Tuesday but know a single point would still be enough to see them qualify.

Ahead of the exciting but tense match-up in a game which is more or less a shootout between the two European giants, United’s captain Maguire has admitted that the squad are feeling they can get the job done.