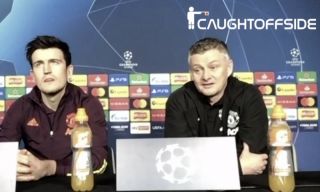 Speaking ahead of his side’s crucial Champions League match against RB Leipzig on Tuesday, Ole Gunnar Solskjaer has hinted that the Reds’ recruitment policy is finally beginning to take shape.

READ MORE: (Video) “He’s one of the best finishers I have ever worked with!” Ole Gunnar Solskjaer hails Man United youngster

United are set to face-off against RB Leipzig in a game which is effectively a shootout for a place in the illustrious competition’s knockout rounds.

Speaking ahead of the tense and exciting clash, Solskjaer was asked if he thinks the club’s biggest names will step up to the plate on Tuesday.

“Knockout games, or games like this that mean if you can through or not, they’re big,” Solskjaer admitted. “The players are here. They’re Man United players because they have qualities that we’ve looked for and i’m sure tomorrow night will prove that’s the reason why they’re here. They will show it.

“The character of the group is getting better and better.

“We’re looking forward to the game. It’s something that we want; games like this.

“It’s some tradition for Man United; we never make it easy for ourselves.”

United will need to take at least one-point off Julian Nagelsmann’s side if they’re to qualify tomorrow night, but a win would see the Reds top Group H.