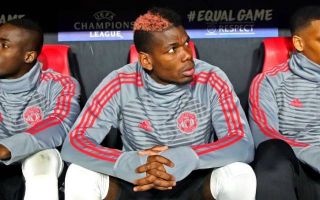 Paul Pogba has been left out of the Manchester United starting eleven to face RB Leipzig tonight – but DOES make the substitutes bench.

Some will be surprised to see Pogba included in the United squad at all tonight.

Mino Raiola, as reported by the BBC, publicly stated Pogba’s intentions to leave the club, detailing just how unhappy he is with life under Ole Gunnar Solskjaer.

On the eve of a decisive Champions League game – that’s borderline unforgivable.

Solskjaer appears to be more forgiving, though, for he has put any differences he has with the midfielder to the side and included him in tonight’s squad.

His start against West Ham was only as a result of Solskjaer shuffling his pack ahead of this game. Even having scored, he was never likely to be in tonight’s XI.

His inclusion in the squad at least provides an opportunity for him to come off the bench and make himself a hero. What a story that would be.

Here’s how some Man United fans on Twitter have reacted to news of Pogba starting on the bench.

This is an absolute disgrace. Pogba is our academy player. He chose to leave Juve and come back to Utd when Juve were playing in UCL finals. He won 2 trophies in his first season back at utd. He scored vs west ham. His stupid agent says something and now he isn’t playing!#OleOut

Paul Pogba has been dropped for tonight’s game against RB Leipzig.

The fact he dropped pogba makes me happy

How is Pogba anywhere near the squad tonight I don’t know ?

Can’t believe Pogba is actually in the squad. If he comes on tonight I’d be raging if I was a one of the players he got on before! Hopefully just on the bench and doesn’t get on regardless of the score