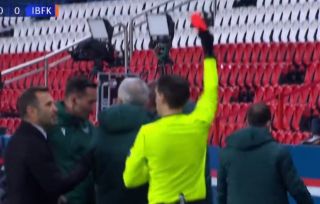 Basaksehir are a strange club because they don’t have a strong history or even a substantial support, but they do have incredibly close ties with the Turkish President Recep Tayyip Erdogan which has given them a lot of help to get where they are.

There are plenty of suggestions that he helps them get favourable financial injections and players may not have to pay as much tax as others, so it’s easy to see why most of Turkey despises them.

They have become the centre of attention tonight after an incident during the game where the fourth official made racist remarks towards the Basaksehir bench, while the game looks destined to be abandoned with no back-up officials to take his place.

READ MORE: Video: Astonishing scenes as PSG vs Basaksehir interrupted and red card dished out over racism claims against the assistant referee

There’s no doubt that UEFA need to take urgent action after this to send a strong message to the footballing world, so it’s interesting to see that Erdogan has taken to Twitter to put some early pressure on the organisation tonight:

We’ve seen far too many incidents where racism has been swept under the carpet with minimal fines and sanctions, but this has been seen by the entire world so it will actually need to be dealt with this time round.