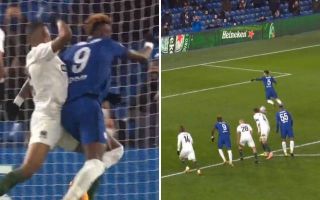 Chelsea were trailing for just four minutes during their dead rubber Champions League tie with Krasnodar this evening.

After Cabella beat Kepa at his near post, Chelsea found themselves trailing at Stamford Bridge – with fans within the confines of the stadium, of course.

Thankfully for Frank Lampard, it didn’t take long for his side to strike back, with Tammy Abraham being fouled in the box and winning a penalty.

Jorginho, who lost his penalty taking duty to Timo Werner, picked up the ball and assumed responsibility for despatching – as he did, in characteristically confident fashion.

The Italy international has already missed a penalty in this year’s Champions League campaign. He will have breathed a sigh of relief when he saw this one ripple the back of the net.

Although Chelsea’s qualification for the next round is already assured, Lampard will no doubt be looking to cap off their group campaign with a win at the Bridge.