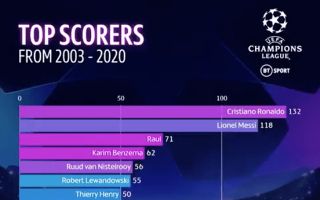 As so much is expected of the pair every time they take to the field, it’s often forgotten just how lethal they’ve been throughout their careers, and the big names that they’ve left in their wake in the premier European tournament.

The handy graphic below shows their rise to the top, who they’ve passed on the way up, and just how far ahead of the competition they remain.

When you consider the legends they have surpassed, and by a distance! ?

Two of the best to ever do it ? pic.twitter.com/B7ZymKIfDf