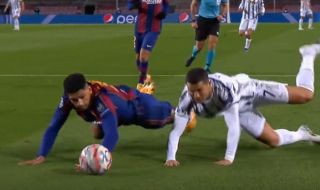 Juve headed to Italy with the knowledge that they would need to beat Barcelona by a few goals to overturn the head to head advantage, but they would’ve fancied their chances against a Barca team who aren’t playing well just now.

These games are always turned into a clash of Ronaldo vs Messi due to the history between the pair, so it’s Ronaldo who struck first from the penalty spot:

Clinical from the spot ? pic.twitter.com/B6W8boxDpl

Pictures from the UEFA Champions League

The actual award of the penalty did look harsh and you can understand why Barca were furious, but there was contact so there was no chance of VAR stepping in to overrule.