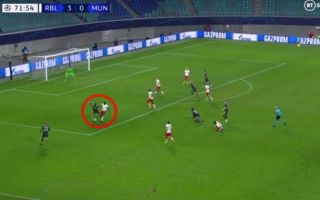 Manchester United were knocked out of the Champions League this evening, but there was a moment to remember for academy graduate Mason Greenwood.

The Red Devils fell to a 3-2 defeat to RB Leipzig, despite a late fightback, which ensured that they would be exiting the Champions League and will be playing Europa League football going forward.

The United squad will be down in the dumps on the flight home, no doubt, but you get the feeling that Greenwood might be watching this moment back a few times, even in wake of the defeat.

The Englishman went full Zinedine Zidane by executing a perfect roulette around RB Leipzig’s Nordi Mukiele and earning himself enough space to get a shot away.

Unfortunately for Greenwood, the shot was saved by the goalkeeper rather than nestling in the bottom corner, but it’s great to see a player of his age showing confidence like that in a game of this magnitude.