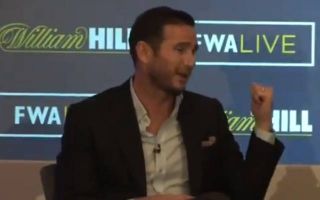 A clip has emerged of Chelsea manager Frank Lampard discussing Paul Pogba – and it’s safe to say the Blues will not be in the race to sign the Man United midfielder.

As reported by the BBC, Pogba wants out of Man United – or so agent Mino Raiola has claimed. Raiola insists that his client is not content with life at Old Trafford.

As a result, you would assume that Pogba will be on the market in the transfer windows to come, with finding a new club for the Frenchman now high on Raiola’s list of priorities.

One of the few clubs in the world with the financial firepower to sign Pogba, and who has recently demonstrated the willingness to utilise said firepower, is Chelsea.

However, one would assume that Roman Abramovich will not be opening his chequebook anytime soon. Have a look at this clip that has emerged of manager Lampard discussing Pogba.

Pictures courtesy of The FWA

Though Lampard acknowledges that Pogba is more talented than he was, his talent has never been in doubt, he’s right in saying that the World Cup winner has no real identity.

He’s a midfielder who possesses all the attributes to play further forward, but tends to play deeper, and lacks the concentration to play there.

Who would break the bank to sign Pogba, when nobody knows what he actually is?