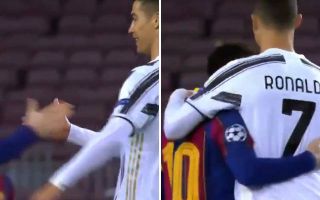 Lionel Messi and Cristiano Ronaldo gave the fans what they wanted with a warm embrace ahead of their clash at the Nou Camp this evening.

Messi and Ronaldo have gone head-to-head over the past decade in their battle for football supremacy. Even this far down the line, it remains a matter of opinion as to determining which is the superior player.

They are two extraordinary players who will be dearly missed when they’re no longer around, and with both players the wrong side of 30, you wonder how many more times we’ll see them on the pitch together.

That made tonight’s game in Barcelona all the more special, with Juventus travelling to the Nou Camp to take on the La Liga heavyweights – and so far coming up trumps.

There’s been no niceties on the field of play, but only because they got it out of their system before kick-off. Have a look at the moment we were all waiting for – the hug.