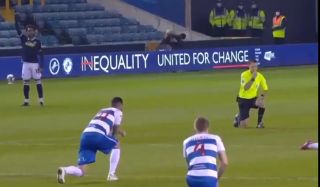 It would be a push to say that the footballing community was shocked by the Millwall fans booing at the weekend when the players took the knee, but there was widespread disappointment.

Thankfully those in charge of the club have had a real push ahead of the game to get some reasonable behaviour from the fans, with a personal plea from the club being handed out to every fan on arrival:

Millwall giving this to all 2000 fans on arrival. pic.twitter.com/PV1JwgdhLf

It’s not completely perfect and there are suggestions that the fans were simply clapping the players who refused to join in rather than everyone who did kneel, but it’s a case of baby steps just now:

Millwall fans applaud as some players take a knee before kick off against QPR on Tuesday night.

It certainly looks like things are moving in the right direction, so hopefully one day we reach a point where the club doesn’t have to resort to pleading with the fans, or at least we’ll see those booing explain why they are actually so outraged in their own words rather than copying and pasting a dictionary definition of “marxism” to justify their cause.