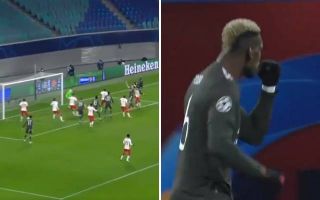 Paul Pogba’s had his moment of redemption for Manchester United against RB Leipzig, providing the assist for Harry Maguire with less than 10 minutes to play.

As reported by the Daily Mail, just yesterday Mino Raiola revealed that Pogba no longer wants to play for United. He’s issued a come and get me plea on behalf of his client, on the eve of the biggest game of their season so far.

It was unclear whether he would even be included in the squad for tonight’s clash with RB Leipzig, but he was, albeit among the substitutes. He’s now made his impact from the bench.

With Man United 3-1 down, Pogba rose above the Leipzig defence to head the ball into teammate Harry Maguire, with it ending up in the back of the net via another couple of deflections.

Wouldn’t you know it, Paul Pogba scores for Man Utd!

Two goals in no time at all and suddenly there’s a lifeline… pic.twitter.com/dNeHwTyxAs

It’s not the prettiest of goals, and it’s not even Pogba’s, but he will get the plaudits for his contributions towards it finding the back of the net.