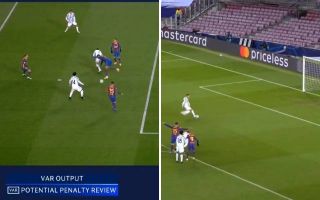 Cristiano Ronaldo has done it again. The former Real Madrid forward has scored his second goal of the game against Barcelona at the Nou Camp.

This one was awarded by the referee after consulting with the pitch side VAR monitor.

It is, in truth, every bit as soft as the first one, but if we’re going full jobsworth and interpreting the laws by the letter, it is also a foul.

The referee looked at the incident intently before deciding to give a penalty. Ronaldo stepped up to the mark once again, and it was the same result.

Tonight was sold as the battle of two GOATS – Lionel Messi and Cristiano Ronaldo. There’s only been one winner on the night, with Juve and Ronaldo running rampant.

It’s in games of this kind that Messi would usually grab the game by the scruff of it’s neck, but perhaps this is a reflection of how the Argentine has declined.