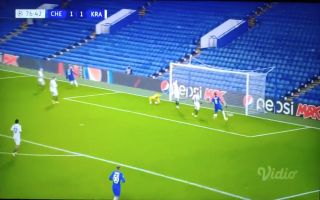 In the 76th minute of tonight’s Champions League tie between Chelsea and Krasnodar, Tammy Abraham was presented with a glorious chance to score against the Russian outfit.

Timo Werner held off one Krasnodar player before turning another inside and out as he charged into the box, the German then drilled a ball across the face of an empty goal.

Abraham unfortunately couldn’t get away from his man quick enough as the ball flashed across the face of the goal and away, any touch would’ve put it into the back of the net.

Just 10 minutes before Abraham forced a save from the Krasnodar goalkeeper after pouncing on an error from one of their defender’s that tried to trick him with a bit of skill:

Abraham has contributed five goals and six assists from 17 appearances this season – which is very good considering his limited action due to Werner playing centrally at time and also Olivier Giroud.

But chances like this are the really ‘gimmes’ that the youngster needs to bury to send a statement to Frank Lampard and keep the centre-forward battle fierce.