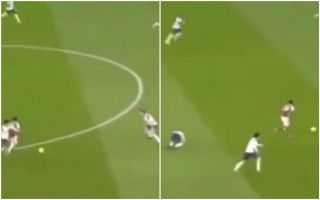 Some eagle-eyed Arsenal supporters have been left rejoicing after noticing that marquee midfielder Thomas Partey ruined his Spurs counterpart Pierre-Emile Hojbjerg during the north London derby.

Unfortunately, Partey’s shock decision to walk off the pitch as Arsenal were being hit with a counter that led to Spurs’ second goal on the brink of halftime will remain his most notable moment of the day.

Some Arsenal fans have noticed a moment from the first-half which shows their big-money man in a positive light, before he was replaced by Dani Ceballos at the break after aggravating a thigh injury.

Partey won the ball in the Gunners’ half before bursting forward whilst holding off relentless Spurs forward Heung-Min Son, at the same time he was approaching a meeting with Hojbjerg.

The former Atletico Madrid man showed some serious quality to wrong-foot Hojbjerg whilst still being pressured by Son, before using his strength to send the Dane crashing to the floor.

See More: ‘We will talk about it’ – Mikel Arteta on Thomas Partey’s decision to walk off with injury as Spurs scored second goal

25% fit Partey vs fully fit Hojbjerg who is in the form of his life.
pic.twitter.com/95UrHidKGa

Arsenal may have to wait some time to see a moment like this from their summer recruit due to the clearly rash decision from Mikel Arteta and Co. to bring Partey back from injury too soon.