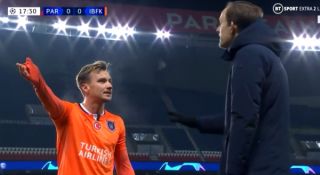 If a game like PSG vs Basaksehir is taking all the headlines on a night when Messi is facing Cristiano Ronaldo then you know something big has happened, but this is completely for the wrong reasons.

The game had to be suspended when the fourth official was caught making racist comments towards the Turkish bench, while it appears it will be restarted without that official being in place.

The silence from the stands means it was all picked up by the mics, and this is pretty uncomfortable viewing for the PSG manager Thomas Tuchel as there are suggestions he’s trying to stick up for the ref.

Tuchel was picked up discussing the incident in English with Istanbul ace Fredrik Gulbrandsen, with the two taking differing stances, as we’ve quoted below…

Am white like him but someone tell TUCHEL #BlackLivesMatter forever. #UCL #MUFC pic.twitter.com/72k4LEo1Ik

Gulbrandsen: “That is a racist comment… but he said he said it”

Tuchel: “You don’t know, you didn’t hear it”

In fairness to Tuchel it does sound like he’s trying to say to the player that he didn’t hear what was said, but it also sounds like the official admitted his comments so he has no reason to be trying to downplay them.

It’s a dreadful look for the PSG manager when all of the players have been united in their response by walking off the field, so he could have some uncomfortable questions to answer about this.