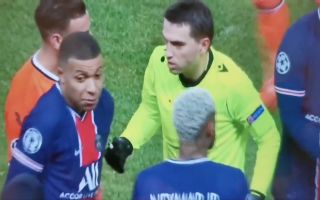 Paris Saint-Germain and Istanbul Basaksehir’s Champions League tie tonight was abandoned after an incident of racism, the frenzy led to an immediate stoppage of play and the action never continued.

Demba Ba was outspoken to the officials after Istanbul coach and former Cameroon international Pierre Webo was subjected to horrific comments.

The incident was explained later, fourth official Sebastien Coltescu allegedly told referee Ovidiu Hategan to send off the ‘black guy’ – in reference to Webo after a disagreement on the sidelines.

Later in the discussion, Kylian Mbappe, the 21-year-old with the world at his feet, stood up for what is right by telling Hategan that ‘we cannot play’ if Coltescu remains involved.

Coltescu would’ve had to be substituted for one of the VAR officials – thereby taking their role – which both sets of players clearly weren’t willing to agree to, the match has now been rescheduled.

See More: “I am not a racist” Fourth official Sebastian Coltescu’s explanation picked up by TV mics after incident between PSG and Basaksehir

Mbappe: “We can’t play with this guy” ? pic.twitter.com/L8r2VIQKHw

Proud of Neymar and Mbappe for refusing to continue with the game. ???for Ba for not letting this slide. pic.twitter.com/w50fejtXwS

Pictures from the Champions League.

Mbappe’s actions, as well as his teammates like superstar partner Neymar are extremely commendable, they used their stature to insist that a stand would be taken tonight.

This was in stark contract to the reaction of their manager Thomas Tuchel to the incident.