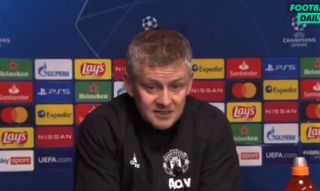 The Norwegian tactician did not look in the best of moods after the Red Devils were dumped out of the Champions League, and he had a message for Raiola, which you can see in the video below…

? "As soon as Paul's agent realises this is a team sport, the better."

Ole Gunnar Solskjaer hit back at Mino Raiola in his post-match press conference last night, after Manchester United got knocked out of the Champions League.

Although Solskjaer was not too keen to discuss the Pogba situation, he made the point of saying that it would be good for Raiola to realise this is a team sport.

Pogba’s agent has often been outspoken in the media and this has seemed pretty harmful for the France international during his time at Old Trafford.