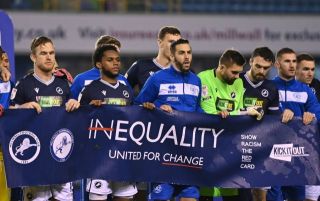 Millwall players reportedly had a late change of heart about taking a knee before their Championship clash with Queens Park Rangers.

There was controversy at the weekend when Millwall fans booed their players for showing solidarity with the Black Lives Matter movement by taking a knee before playing against Derby County.

According to Sky Sports, it seems the club are now keen to start their own anti-racism campaign, as they showed at the start of their game with QPR.

Players from both sides linked arms and displayed an anti-racism banner before the match, and it seems this was met with a more positive reception from the fans.

It is sad to see that so many still have issues with bringing up the important issue of racism in football and society as a whole, as events during the game between Paris Saint-Germain and Istanbul Basaksehir last night also showed.

One hopes Millwall can remain committed to making a statement and educating some of their supporters on this important issue.