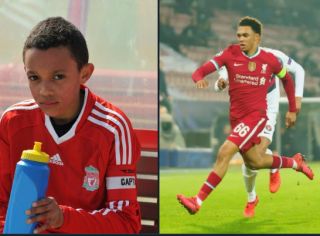 Trent Alexander Arnold has always looked like a Liverpool captain in waiting. Obviously he’s a quality player which is important, but the way he talks and carries himself shows that he’s a leader that teammates will get behind.

He will need to wait for Jordan Henderson to move on before he can officially be crowned as the permanent captain, but he did get a chance to lead the team out in their Champions League game against Midtjylland tonight.

It turns out there’s always a good picture to go with moments like these, and he shared an image of him as a captain at youth level next to where he is now and it shows just how far he’s come: