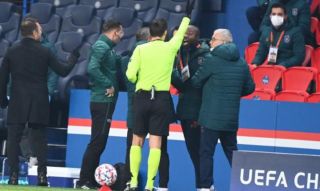 PSG could still top the group tonight with a win against Basaksehir, but it’s a pretty meaningless fixture for the Turkish side who are already out of the competition.

The tie does take on some added significance after the scenes we saw last night as both sides left the pitch due to alleged racist comments from the fourth official.

The incident has demonstrated that there are suddenly thousands of people online who claim to have an intricate knowledge of the Romanian language, but that argument will rumble on as an investigation tries to get to the bottom of what happened.

READ MORE: “I am not a racist” Fourth official Sebastian Coltescu’s explanation picked up by TV mics after incident between PSG and Basaksehir

It seems that Basaksehir assistant Pierre Webo was the subject of the comments from the ref, while he was also sent off in ensuing scenes so his status for the game was in question.

Thankfully it looks like UEFA have decided to suspend that red card decision for now, so he will take his place on the bench for the game this evening:

Breaking | Pierre Webo’s red card, received last night & instigating the instance of alleged racism, has been suspended by UEFA – he can, should he want to, be on the touchline tonight for Istanbul Basaksehir, according to RMC.

Most of the live updates and official stats from the game last night had Demba Ba down as the person who was sent off although it now seems that it wasn’t directed at him at all, so you have to assume that he will also form part of the squad again.

It’s pretty dire stuff when you look at a game in UEFA’s flagship competition and just hope that it passes without incident, but at least there was unity between the players so there shouldn’t be too much scope for things to turn nasty again.