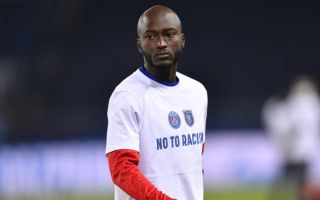 The message was clear ahead of the restart of PSG vs Istanbul Basaksehir at the Parc des Princes – no to racism.

As reported by the BBC yesterday evening, both sets of players walked off the pitch yesterday night after the fourth official allegedly used a racist term. It was an unprecedented and powerful moment.

The game will restart tonight from where it left off yesterday, but the players are not going to allow the message behind the walk-off get lost in all the controversy.

MORE: Video: Astonishing scenes as PSG vs Basaksehir interrupted and red card dished out over racism claims against the assistant referee

Both players donned ‘No To Racism’ shirts in the warm-up for tonight’s game.

PSG’s ultras, who of course cannot enter the stadium in the midst of the COVID-19 pandemic, have also prepared a message of their own ahead of the game tonight.

See below the banner which they have plastered across an entire stand tonight, which reads: “Support for M.WEBO [Istanbul Basaksehir assistant manager] … proud of the players … against racism.”

This could prove to be one of the most significant games in European football history, which seems bizarre to say about what is essentially a dead rubber.

This message needed to be heard – and now everyone is hearing it.