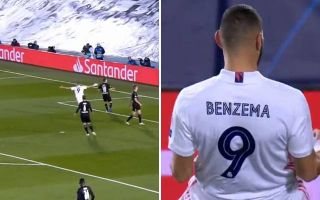 Karim Benzema has been a vital part of the Real Madrid team for over ten years now, but it still feels like he’s never truly been appreciated.

It could simply come down to Real being a club who look to sign big name forwards every summer so most players don’t last long, while his style isn’t the flashiest so he often goes under the radar.

The reality is that he’s just become the first player to match an impressive achievement that only Messi and Ronaldo have done before, so it shows that he really does deserve to be talked about as one of the best strikers in world football:

Karim Benzema joins Lionel Messi and Cristiano Ronaldo as the only players to score 50 goals in the #UCL group stages ? pic.twitter.com/so8WpCgYPq

He’s come up with so many important contributions in recent years as the whole team tried to step up to cover the loss of Cristiano Ronaldo, but he might be the only forward player that Zidane can rely on at this point.

His two first half goals against Monchengladbach should be enough to see Real through to the knockout stages, while it should also give Zidane a decent amount of breathing room after a tough run of results.