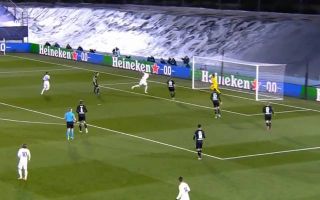 Karim Benzema has done it again. The Real Madrid striker has scored his second of the game, and that might be enough to get them through to the next round.

Real Madrid headed into this game knowing that they could scarcely put a foot wrong if they wanted to have any hope of progressing to the knockout stages of the competition. Being the team that has won the European Cup/Champions League more any any other, ZInedine Zidane will have known that it was a MUST to get them through, home and dry.

Benzema’s first goal, a great header, was a step in the right direction, with his second closer to a giant leap. The Frenchman once again find himself in between the Borussia Monchengladbach centre-backs, and it was the same result. This time it was in off the goalkeeper, who could have done better, Benzema will care not. It’s 2-0 to Real Madrid in their home city.