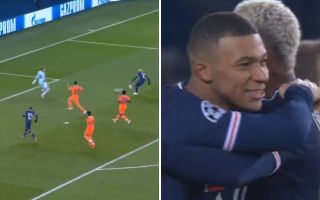 PSG forward Neymar has done it again. The Brazilian has netted his second of the game in the suspended clash with Istanbul Basaksehir.

Neymar, who was one of the PSG players who supported Istanbul Basaksehir’s walk-off yesterday evening, scored just six minutes after the game restarted in the 14th minute – and what a goal it was.

The Brazilian international was not done there, however. After some neat interplay from the PSG attack, Neymar squeezed the ball home past the goalkeeper and into the back of the net for his second.

Perhaps annoyingly for Neymar, he was robbed of his hat-trick goal by teammate Kylian Mbappe, who picked up the ball after the referee pointed to the spot – for a foul on Neymar.

Mbappe hadn’t scored in the Champions League this calendar year, so perhaps that’s why Neymar was feeling so generous. Still, it’s unusual for him to give away what would be a hat-trick goal.

Credit to him, I suppose.