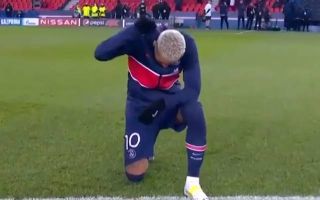 PSG and Istanbul Basaksehir took the knee to send a powerful message ahead of their clash at the Parc des Princes this evening.

As reported by Sky Sports, both sets of players walked off in the 14th minute of the game last night after an alleged racial remark was made by the fourth official. The game was abandoned and subsequently pencilled in for the early evening kick-off tonight.

While the players were now prepared to take to the field and finish the game, they were also intent on echoing the message that they sent yesterday – that there’s no room for racism, in football or anywhere else.

Watch below as every player from both sets of teams took the knee in unison.

PSG and Basaksehir unite to take a knee during the Champions League anthem, after Tuesday’s alleged racist incident. pic.twitter.com/0igIfpADcE

This is a powerful and iconic moment in Champions League history, in a fixture which means little in the grand scheme of things. Hats off the both sets of players for their contributions to the cause.