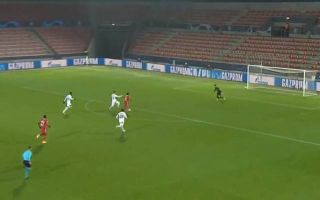 Liverpool only needed a minute to open the scoring away to FC Midtjylland, with Mohamed Salah finding the back of the net.

Jurgen Klopp’s men will be progressing to the knockout stages of the Champions League as group winners, but the German doesn’t appear keen on taking his foot off the gas.

Liverpool have fielded a strong, if rotated, starting XI tonight in Denmark, which includes talisman Mohamed Salah. The Egyptian has got himself on the scoresheet already tonight.

It’s not the best goal that Salah will ever score, and you have to say it’s one of the more fortunate ones that he’ll ever add to his tally, but it is a significant one.

With Liverpool safely heading through to the next round of the competition, you get the feeling that now second-place Steven Gerrard won’t be too disappointed.