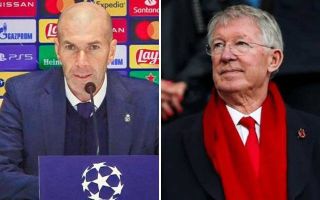 Zinedine Zidane has insisted that he will not be Real Madrid’s Sir Alex Ferguson, even if he has only ever managed Los Blancos in his career to date.

Zidane bought himself some time at the Santiago Bernbaeu with a win over Borussia Monchengladbach this evening – albeit, it wasn’t played at the ordinary scenery for a big Champions League night in Madrid.

The Frenchman oversaw a 2-0 victory over Gladbach, which ensured their progression into the knockout stages of the competition as group winners, something that looked like an uphill task at one point in time.

You’d like to think he won’t face the sack after dragging Real Madrid through, but he has been quick to note that he won’t be in charge at the club forever, as local journalist Arancha Rodriguez reported on Twitter.

It translates as: Zidane: “I’m never going to be Madrid’s Alex Ferguson. I want to enjoy and I don’t know how long I’m going to stay here. I just think about how lucky I am to be here but I do not know until when! There are many years left in Madrid and I want to continue.”

Fergie is considered the greatest manager of all-time, mostly for reasons relating to longevity. He was the best for such a prolonged period that his legacy is almost unchallenged.

Zidane has done well even to mention himself in the same sentence as Sir Alex. Although, he did win three back-to-back Champions Leagues, didn’t he?