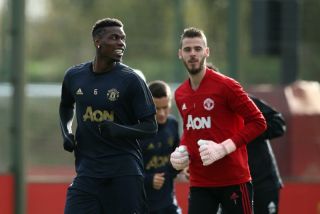 All is not well at Manchester United, with thanks largely owed to Paul Pogba and his super-agent Mino Raiola.

READ MORE: Real Madrid and Zinedine Zidane on a collision course as they completely disagree on Paul Pogba signing

Pogba, 27, rejoined United back in 2016 from Juventus, four-years after departing the Reds’ youth academy.

Since his arrival back at Old Trafford, the talented Frenchman has featured in a total of 178 matches and has been directly involved in a decent 69 goals in all competitions.

However, the midfielder’s latest four-year back at United have seen him go through major up and down spells of form.

Often the source of criticism, which is perhaps derived from his whopping £94.5m price-tag (Transfermarkt), Pogba is never far away from the headlines; both good or bad.

Pogba’s super-agent Raiola recently shocked the footballing world after a savage interview led to the sporting tycoon declaring his star client was ‘unhappy’ and his time at United was ‘over’, as per BBC Sport.

In light of Raiola’s shocking admission, a transfer away from United now seems virtually nailed on with Real Madrid and Pogba’s previous employers, Juventus, the two main candidates to offer the Frenchman a way out of Manchester.

However, according to a recent report from Italian outlet Calciomercato, Juventus could be ahead of Real Madrid in the race to land Pogba.

Calciomercato claim that Raiola’s relationship with Los Blancos president, Florentino Perez is that of a fractured one, and the pair’s poor working relationship poses a real threat to a potential deal being struck.

The outlet’s report goes on to claim that Real Madrid manager Zinedine Zidane tried to sign Pogba just over 12-months ago but Perez’s poor relationship with the star’s agent prevented an agreement being reached.