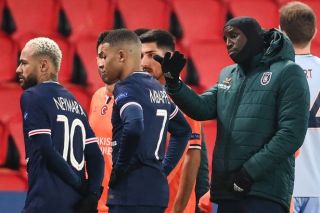 Paris Saint-Germain superstar Kylian Mbappe is proud of his team for deciding to walk off the pitch in a strong anti-racism protest on Tuesday night.

The France international was involved as PSG and Istanbul Basaksehir both decided to call off their match after a row erupted between a match official and Demba Ba over allegedly racist language towards the Turkish club’s assistant manager Pierre Webo.

This is the first time a high-profile game like this has been abandoned over racism, though it’s felt a long time coming as this issue seems to cause more and more tension in 2020.

PSG and Istanbul Basaksehir’s game was moved to Wednesday night instead, and Mbappe spoke of his pride after the 5-1 victory.

The 21-year-old insists actions like this are important, and it’s hard to argue with that, with this huge gesture likely to be the kind of thing that forces real change at the top.

Speaking about the whole saga after the game, as quoted by BBC Sport, Mbappe said: “We are tired, we don’t want to go through this again.

“Of course, I am proud of what was done. We were not disappointed not to play. We made that decision. We were proud.

“A lot of things were said but, in fact, there’s nothing better than actions.”