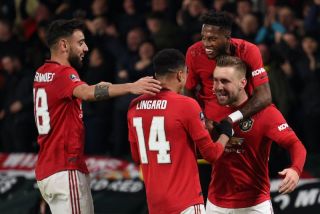 Manchester United midfielder Jesse Lingard, who is also represented by super-agent Mino Raiola, is reportedly expected to reject a new contract at United as a move abroad appears more than possible.

Lingard, 27, has spent his entire with United after joining their youth academy all the way back in 2000.

A series of successful loan spells with the likes of Birmingham City and Leicester City helped propel the English midfielder into his boyhood club’s first-team plans.

After making his senior debut for United back in 2016, the 27-year-old midfielder has gone on to feature in a total of 209 matches in all competitions.

However, despite a decent career with United which has spanned over 20-years and has seen the midfielder lift four major trophies, Lingard could finally be set for a move away from Old Trafford.

After falling out-of-favour with current manager Ole Gunnar Solskjaer, Lingard has seen his playing-time severely restricted as the 27-year-old is now forced to play nothing more than an bit-part role.

According to a recent report from Corriere dello Sport, Lingard is expected to reject any new contract proposals from his current employers as his agent, Raiola, continues to sound out potential suitors.

CDS claim that Raiola has offered his client’s services to Serie A duo Inter and AC Milan with La Liga title contenders, Real Sociedad the latest club to be pitched the United midfielder’s services.

Arsenal superstar apologises for social media outburst that was ‘too emotional’

The Italian outlet’s report also claims that a six-month loan in January is a real possibility as the midfielder continues to eye a permanent move in the near future once his current deal expires.