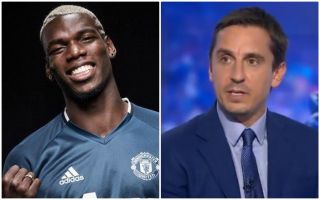 Gary Neville seemed to have high expectations of Paul Pogba when he joined Manchester United in 2016.

It’s surreal to watch this video back now, with Neville talking about what felt like the start of a new era at United, who hired Jose Mourinho as manager and also brought in Zlatan Ibrahimovic that summer…

? "The idea of Pogba returning is big on the personality front"@Gnev2 when Manchester United first signed Paul Pogba in 2016 pic.twitter.com/J0wTWMPeIV

Neville felt these big personalities all arriving would be good for Man Utd, but of course it didn’t work out that way at all.

Mourinho and Pogba did not seem to work as a combination, and as time goes on you almost feel sympathy for the Portuguese tactician, with Pogba proving to be more trouble than he’s worth after making the headlines for all the wrong reasons yet again this week.