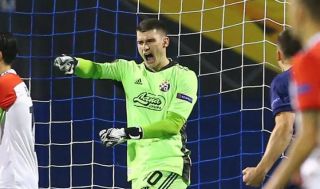 It’s easy to forgot that Man United used to be utterly dominant in Europe unless they had to play Barcelona, but their record from 2011 and just been beaten by Croatian giants Dinamo Zagreb.

They went into their game against CSKA Moscow 2-0 up at the break, and it means they’ve lasted five and a half games without conceding a goal – or 495 minutes and counting.

It’s been confirmed by Croatian outlet 24sata that United previously held the record back in 2011 when they went a total of 482 minutes without conceding, although that was in the Champions League so it might still look more impressive.

It’s impressive stuff from Dinamo when you consider they were in a strong group that contains CSKA Moscow and Feyenoord, while Austrian side Wolfsberger look set to follow them through to the next round so they are no pushovers either.

Dinamo aren’t strong going forward with only eight goals across the six games to that defensive record is vital, while it could also take them deep into the competition if they manage to keep it up.