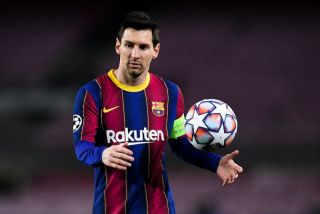 Barcelona presidential candidate Victor Font is convinced he can get star-attacker Lionel Messi to commit his long-term future to the La Liga giants should he be elected as the club’s new president.

READ MORE: Video: Callum McGregor’s immediate redemption for Celtic as he scores after a dreadful mistake leads to equaliser

Messi, 33, has spent his entire career with Barcelona after joining their illustrious youth academy all the way back in 2000.

After climbing the club’s ranks, Messi has gone on to become arguably the greatest football player ever to grace the beautiful game.

The Argentinian magician’s career speaks for itself, after featuring in a whopping 745 matches for the Catalonian giants, Messi has racked up a monumental 641 goals and 282 assists in all competitions.

During his 20-year plus long career with Barcelona, Messi has had a huge hand in his side lifting a whopping 34 major trophies, including four Champions League trophies and 10 La Liga titles.

However, in a shock turn of events earlier this summer, Messi’s long-term future was thrown into a cloud of doubt.

Turmoil among the Barcelona ranks prompted Messi to publicly declare his interest in departing the club he has given so much to.

Despite the speculation, a summer move failed to materialise and after giving Goal an exclusive interview, the 33-year-old world-class attacker admitted he would remain at the Nou Camp for at least the 2020-21 season.

However, with the star’s current contract expiring next summer, Messi will be allowed to agree a pre-contract with a club as early as next month.

Speaking exclusively to ESPN, Barcelona presidential candidate, Font, has claimed that should be elected as the club’s new president, he will endeavour to get club legend, Messi, to sign on the dotted-line.

“I’m convinced that with a competitive, exciting and, especially in Messi’s case, long-term project — one that could even go beyond the day that Messi retires — we will convince him to stay,” Font said. “Messi is the best player in the history of the No. 1 sport in the world. Imagine what that means. For that reason, the Messi-Barca association is a strategic one and we must do everything possible to guarantee the association lives on.

“Keeping in mind he can speak with other clubs in January, phoning Messi [if I win the election] must be one of the priorities.”

Font has admitted that he is yet to speak with Messi’s representatives but has promised to find a role for legendary midfielder Xavi if he is elected.

“[Xavi] is one of the most important parts of the sporting project we have designed.

“The fact Messi and Xavi know each other [is good]. Xavi is someone Messi trusts. I know Messi would welcome the leadership Xavi can bring.

“But it’s about the whole project, not just one person. What’s important in the Messi case, to excite supporters again and, above all, to emerge from the complicated situation the club is in at all levels, is the whole project. It’s not one name or a coach, it’s the whole structure.”

“Messi, above all else, is a person that loves Barca and what he wants is to win,” Font added.

“Of course, the best player in the world and the best of all time has to be compensated competitively. But I think his priorities are competing and winning.

“[His salary] is one of the realities that has to be adjusted. The level of revenue in the short-term and for next season is up in the air. It depends on what happens with fans coming back to the stadium.

“Based on that, we will have to structure the wage bill appropriately. Once we are clear on that situation; we will know what the club can afford.

“Messi is a Barca fan and he loves Barca as we all do. He’s been here for a lot of years, since he was 13, and I am sure that regardless of what he wants to do [with his career] to keep winning, his passion and love for the club is more than anything else.”

In light of Font’s promises, presidential competitor, Jordi Farre, has gone with a much more attractive offer; free pizzas and tattoos to all season ticket holders.

I know who would get my vote – Hold the pineapple but double up on the cheese, please Jordi!