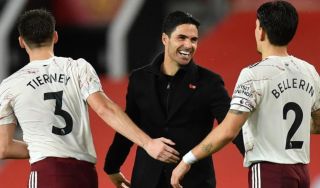 Being a fan of a struggling football club is mainly about looking for small victories as everything else is falling down.

Arsenal have had a shocking season in the Premier League this season as they look to solidify their status in the bottom half, but at least they can claim to be kings of Europe – in a very specific sense that may not last for very long.

You do have to overlook the fact that they were playing in the Europa League against some pretty poor teams, but they are officially the only team across the Europa League and the Champions League to win all six of their group games this year.

The competition has been a welcome escape for Mikel Arteta as his fringe players have looked convincing and given him some options when it comes to Premier League selection, although anything short of qualifying would’ve been a disaster.

It’s not a massive achievement but it is something, but it will take substantially more to present them as serious contenders to win the competition.