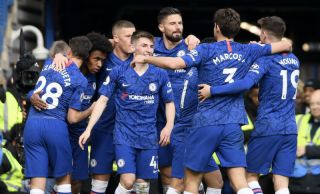 Chelsea youngster Billy Gilmour, who is now back to full fitness, is reportedly being considered for a January loan move by Steven Gerrard’s Rangers.

READ MORE: Small victory for Arsenal as they’re the only team in European competition to achieve this

Gilmour, 19, joined Chelsea’s youth academy in 2017 after leaving Rangers’ in a deal which cost the Blues just £531,000, as per Transfermarkt.

Since his arrival in London, the young Scottish midfielder has grown to become one of the club’s brightest prospects.

After already featuring in 78 youth matches for Chelsea’s under-18s and under-23s, Gilmour went on to make his senior first-team debut during a pre-season friendly last summer.

However, Gilmour found his impressive development halted after a nasty knee injury meant the midfielder missed 20 matches and has only just regained full fitness.

In addition to the teenager’s injuries woes, given his side’s fierce summer recruitment, Gilmour is now pitted against a plethora of midfield talent.

In an attempt to get top-level minutes back under his belt, The Times claim that Chelsea manager, Frank Lampard, is open to allowing his talented youngster to rejoin Rangers on loan in January.

Chelsea fans – Happy to let Gilmour leave on a short-term loan? – Or would you prefer to see him get some game-time under Lampard? – Let us know in the comments.