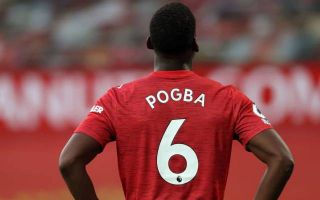 Mino Raiola’s plan to get Paul Pogba out of Manchester United has gone into overdrive in recent weeks, so it must be dreadful for the player to be stuck in the middle of this as he tries to get on with playing.

We always think about players having the ultimate power over where they play and when they get to move, but it’s actually starting to sound like Pogba has been pushed into things he never wanted to do.

You always get the feeling with Raiola that his clients effectively sign their career over to him and must do as he says, so only Pogba will really know if he’s unhappy at Old Trafford and if he really wants to leave.

The interesting thing is a report from Goal has even suggested that he didn’t want to come back to Old Trafford in the first place, but they offered Juventus so much money that he felt he had to move on for their benefit.

They add that he was hoping to move to either PSG, Barcelona or Real Madrid, but it was United who came up with the money so he had little choice but to accept the move.

He’s struggled for form and confidence over the years while injuries have been an issue too, but it does look like he might have been affected by all of these outside influences telling him what to do.

It would also make sense that he seems so happy and free when he plays for France, because no agent or country can make him change so he’s free to simply play for his team and focus purely on the footballing side of things.

It’s not like it’s a travesty from his point of view as he’s paid millions of pounds to play football for one of the biggest clubs in the world, but it does make you wonder who’s really in control here?