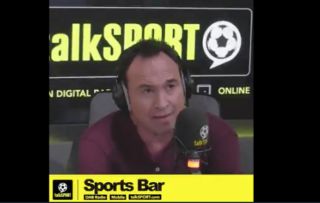 There’s more than one way to win a football match, as has been shown time and time again.

It isn’t always the teams that play the pretty passing carousels that win the three points, or indeed trophies.

The sign of a good manager is one who can get the best out of the players that he has available, and Jose Mourinho is certainly doing that this season.

However, he’s been criticised in some quarters, with Sky Sports’ Graeme Souness suggesting it was boring to watch.

That’s drawn a scathing response from Jason Cundy who has argued that Souness and others are ‘football snobs’ for their tone and comment.

???? “There are football snobs about how football should be played.”

? “There’s a style people prefer but there’s no right or wrong way to play.”

???? “Souness & Scott pontificating about Spurs being boring, so what!?”