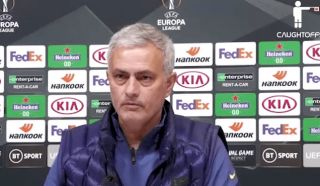 Jose Mourinho was at pains to point out during his pre-match press conference before Tottenham take on Crystal Palace that he doesn’t like comparing players who have played for him.

He totally refuted a story that had suggested he’d picked a best XI from all of the players he had coached during his career, but he did want to acknowledge the relative merits of his current strike force of Harry Kane and Son Heung-min.

The pair have consistently combined this season, and Mourinho simply labelled them ‘world class.’