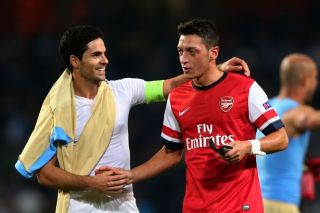 Aside from Arsenal’s particularly poor start to their 2020/21 Premier League campaign, the major talking point of Mikel Arteta’s tenure has been the blanket refusal to play Mesut Ozil.

The creative midfielder has been frozen out since the start of the season having not been named in either of the Gunners’ Premier League or Europa League squads.

In fact, the earliest he could potentially stake a claim to get back in the side would be in February, once the January transfer window has closed.

The north Londoners certainly look as though they could do with a player of Ozil’s skill set in order to be able to unlock defences.

That’s evidently something that former manager, Arsene Wenger, believes too, with the Frenchman suggesting ways in which Arteta could get the best out of the player.

“He [Ozil] was not difficult to manage. He was a guy who had a special quality as a creative player and needed to have fun.,” Wenger said to ESPN’s CaughtOffside Podcast, cited by the Daily Mail.

“He is an artist and these guys are a bit more sensitive. They need support and an environment that pushes them to give their best.

“You have two ways to see a football team. You get everybody to do the same – the same intensity of work, the same defensive work – or you find a compromise.

“You have a more creative player in the team who can do less defensive work but you build a team around him who can compensate for these deficiencies. That is what you have to think about.”

If things don’t improve quickly for Arteta, both the board of the club and the supporters are going to be asking some difficult questions.