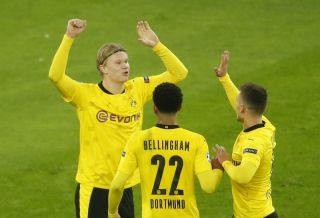 Manchester City are reportedly interested in signing Borussia Dortmund superstar, Erling Haaland, as early as next summer, despite his release clause only being activate from 2022.

Haaland, 20, who was recently named the 2020 Golden Boy is looking likely to become the sport’s next big thing.

Since joining Borussia Dortmund in January, Haaland has emerged as one of, if not, the, most prolific marksman in Europe.

The young Norwegian has featured in 32 matches, so far for Borussia Dortmund and has been directly involved in a monumental 39 goals, in all competitions.

The young forward’s clinical form is, of course, turning the heads of some of Europe’s biggest hitters, including Premier League giants, Manchester City.

According a recent claim from German journalist, Christian Falk, Pep Guardiola’s side are keen to bring the Borussia Dortmund striker to the Etihad next summer.

Falk claims that the blue half of Manchester would like to bring Haaland to England before his release clause comes in to effect, during the summer of 2022.

True: @ManCity would like to sign Erling Haaland next summer. But: the release at @BVB is only valid from 2022, not in 2021 pic.twitter.com/8bmIFOiS1z

It is understood that Haaland’s release clause will stand at £65m from 2022 onwards, as per Daily Mail.

However, according to Falk, Manchester City may be open to paying more next summer in an attempt to bring the wonder-kid to Manchester.