There really aren’t words to describe the element of the public that believe that daubing graffiti over a mural painted for the community is a good idea.

More so when one considers that the mural concerned is of Marcus Rashford – and it’s in Manchester.

The 23-year-old Man United striker has arguably done more than most this year to try and lift everyone’s spirits.

Whether that be through his general demeanour, his evident kindness on social media, or the fact that he’s stood toe to toe with the UK Government on the issue of child hunger, and not relented on his argument until a u-turn has been hard won.

Even when the mural first went up, the humble way in which he addressed the acknowledgement of his efforts and tried to divert attention was inspiring.

Ok I usually get embarrassed sharing these things because this journey was never really about me but I know this took a lot of time and effort @Akse_P19 and I wanted to say thank you ?? pic.twitter.com/alGcHW0gXH

In every possible way he has shown himself to be a genuine, warm and caring young man.

To that end, one can only hope that those who felt the need to vandalise something quite special for the community are apprehended. 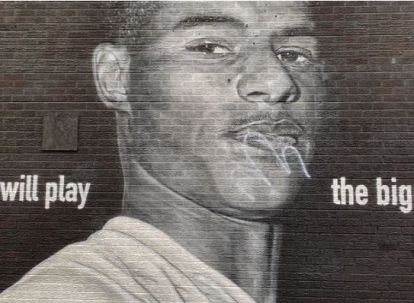