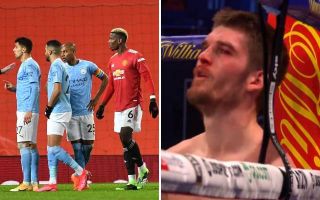 The Manchester Derby is one of the biggest games on the calendar, with nobody wanting to miss out of the action – even if you’re in the middle of a boxing match, apparently.

While today’s 0-0 stalemate between United and City was hardly a classic, it remains one of the most highly-anticipated and watched fixtures in the Premier League.

Macaulay McGowan, a professional boxer fighting on the Anthony Joshua vs Kubrat Pulev undercard, was clearly disappointed to be missing out on the action.

A video emerged of McGowan, who ultimately went on to lose his fight via a unanimous decision, asking his corner what the score was in the Manchester derby between rounds.

Perhaps if his full focus was on the fight he might have got the result, but just like his beloved City, he was unable to return home with a W this evening.

The only difference being that he lost and had his face punched in the process.