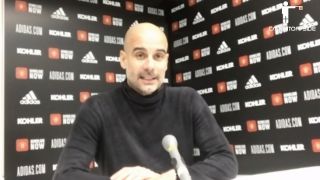 It’s not often that Manchester derbies end in goalless draws, but Saturday night’s encounter did exactly that.

The lack of goals was due in no small part to the effort of Manchester United’s players, who looked to close down the space around Kevin De Bruyne at each opportunity, meaning Man City were never really able to build play effectively.

Though he must’ve been disappointed to have only left Old Trafford with a point, Pep Guardiola showered United with praise in his post-match press conference.