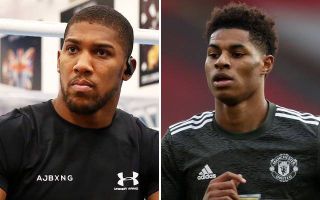 Manchester United striker Marcus Rashford has sent a good luck message to two-time heavyweight champion of the world Anthony Joshua ahead of his title defence against Kubrat Pulev tonight.

Rashford, predominantly a footballer, has spread his influence into previously unchartered territory this year – notably with his efforts to ensure every child in the UK knows where their next meal will be coming from.

One place where we wouldn’t expect him to see, even now, is in the ring, particularly with Anthony Joshua, whose good side he appears to be keen to stay on – and understandably so.

Joshua will be fighting Kubrat Pulev tonight with his belts on the line for the first time since he won them back from Andy Ruiz Jr in Saudi Arabia. Rashford has wished his compatriot luck ahead of the fight.

Rashford, speaking ahead of a heavyweight bout of his own, the Manchester Derby, recorded the below video message to Joshua. Classy as ever from young Marcus.