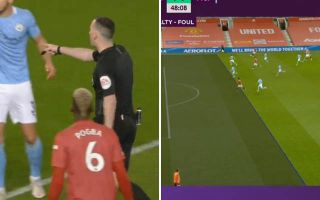 Manchester United were awarded a penalty two minutes into the second-half in the derby – but VAR adjudged Marcus Rashford to be offside in the build-up.

As we headed into the Manchester Derby this afternoon, you figured that United’s best chance of winning the game was from the penalty spot – as it usually is.

Man United have been awarded more penalties since the start of last season than any other Premier League club, with Bruno Fernandes benefiting from that.

Given that a third of City’s conceded league goals this term have been from the penalty spot, you weren’t surprised to see one being given early in the second-half of today’s game.

However, as Fernandes held the ball and prepared to face Ederson, VAR discovered that Marcus Rashford, who was fouled in the box, was offside in the build-up.

The decision was ‘no penalty’, with VAR doing it’s job. Fernandes will have to wait patiently for his next opportunity from 12 yards.