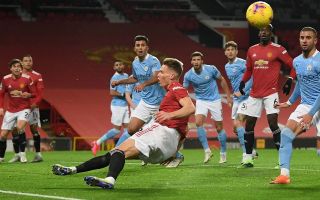 Manchester United have already overtaken an unwanted record from last season – going three home games without scoring, which is one more than they managed in the entire 2019/20 campaign.

The Red Devils could only draw 0-0 with Manchester City yesterday, which follows another goalless stalemate with Chelsea earlier this season, as well as a 1-0 defeat at home to Arsenal.

It’s not often United struggle for goals like this, and it’s particularly damning for Ole Gunnar Solskjaer considering that he has attacking talents like Marcus Rashford, Anthony Martial and Mason Greenwood up front.

Still, here’s this worrying record confirmed in the tweet below from Opta Joe…

3 – Manchester United have failed to score in three home league games this season, one more than in the whole of the 2019-20 campaign at Old Trafford. Nightmare. pic.twitter.com/RfJbgJa5a3

This doesn’t exactly bode well for Man Utd’s hopes for the season ahead, with Solskjaer looking like having problems all over the pitch.

MUFC will surely need a good transfer window in January to turn things around in the second half of the season.